CBD infused foods and beverages are set to become the hottest thing in restaurants and supermarkets this year, according to many sources, and chefs are lining up to creat new gastromonical sensations using the new ingredient.

Chefs across the country say cannabis-infused food and drinks are the top two dining trends they expect to see unfold in 2019, although we’re not talking about food that will get you “high” – these are products made with CBD, a non-psychoactive compound extracted from cannabis plants that enthusiasts say offers health benefits while tempting the palate.

The survey of chefs was part of an annual poll for the National Restaurant Association, which checked with more than 650 professional chefs. Of those, 77 percent said CBD drinks are the No. 1 trend they see for 2019, followed by CBD foods.

“We’re just at the tip of the iceberg of what CBD and cannabinoids can offer,” said Stanley, chairman and co-founder of Colorado-based Charlotte’s Web, which was featured in a 2013 CNN documentary for its work with a young girl suffering from severe seizures. “We’re going to find out what all these tools can do after being prohibited for so many years.”

Read the Full Article at usatoday.com 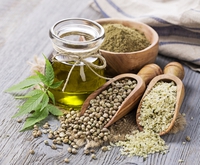 Plant-based ingredients, including cannabis and Cannabidiol (CBD) ingredients are tipped to be one the hottest overall US culinary trends of 2019, alongside zero waste, new research from the National Restaurant Association has revealed.

According to the Association’s 2019 What’s Hot Culinary Survey, a barometer of US food and beverage trends, 650 professional chefs – all members of the American Culinary Federation – said that infusing food and drink with cannabis and CBD could create unique cuisine opportunities and new markets for experiential dining occasions.

2018 saw huge regulatory gains for cannabis and its derived products, including hemp and CBD, with a host of US states and Canada and, very recently the UK, legalizing the use of medical marijuana in some forms. But now, we can expect to see more of this available to consumers as part of a culinary and dining experience.

The next year of major culinary trends might get a little extra boost from a few trendy additives—particularly some whose legal status remains in a gray area.

According to the National Restaurant Association’s What’s Hot in 2019 Culinary Forecast, one of the biggest food trends involves infusing either cannabis or cannabidiol (CBD), a non-psychoactive byproduct of cannabis and industrial hemp, into edible treats.

The 650 professional chefs surveyed—who are also members of the American Culinary Federation–named infused drinks (77 percent) and infused foods (76 percent) as the top two trends in this year’s edition. “What’s Hot” Report Gets an Unexpected Culinary Infusion This Year: Associations Now